We are writing software for more than half of a century. And during this time we learnt really well that dealing with large problems at once is not productive. Things go wrong, plans do not hold, maintenance turns into a nightmare. We’ve got to break large tasks into a few smaller parts, relations among which are overseeable, and to keep on breaking these parts down until implementation becomes clear.

This approach makes sense and we apply it everywhere. And it does work really well… well, nearly everywhere. How do we manage source code? We call every logically complete unit a project, which can be released, delivered and used independently from others. Therefore we create a separate source repository for it and version it there. Yes, of course, not all projects are trivial and therefore they may consist of a few modules, but all of them are managed within one repository. In most of the cases, our project needs external libraries too. So we let build tools to resolve external dependencies from artifact repositories.

What does this approach give us? 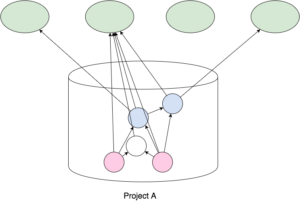 On the image above we see Project A with two applications to deliver, which use three other modules. All these modules depend on a few external libraries. Modules within the project depend on very latest versions of each other. If the project uses Maven, version of the dependency is often expressed as ${project.version} – use whatever you have right now. 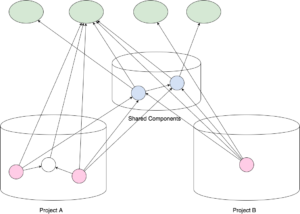 Everything is still very clear and logical. Every project has its own purpose. Changes in Shared Components do not affect delivery projects until they decide to start using the changed code. We still keep things separate and we can focus at one thing at the time.

However, what did we have to do before creating repository for Project B?

Before continuing I’d like to ask you to answer a few questions. Quickly, just for your self.

I think by now you already suspect where I’m going to. The tendency to break down source code into multiple repositories brings serious challenges. Let’s me try to group them.

Re-use and sharing of the code

Most of OSS projects, which limit their scope, can safely ignore these problems. However their scale grows together with growth of the company source base. Therefore companies like Google, Facebook, Twitter, Digital Ocean, Salesforce and Etsy (there must be more) utilize monolithic repository approach. How is it different? Let’s draw our three applications in monorepo. 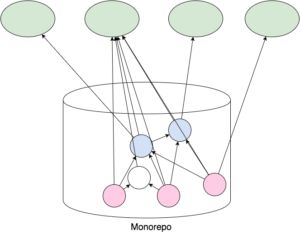 Now all three applications use the very latest version of shared components and this resolves the problems above.

Yes, monolithic repositories approach has its own problems too

However these are implementation problems, problems of the development tools we’ve developed to work with small repositories. Should we hooray git in all situations? Should we run “clean” build all the time? Large companies have been creating their own tooling and it gradually becomes available. Here are a few examples

I’m not claiming Monolithic Repository being a panacea for all software development problems. However if your company grows, has open and collaborative culture and health of your code base matters, it is a very viable approach for handling the code.